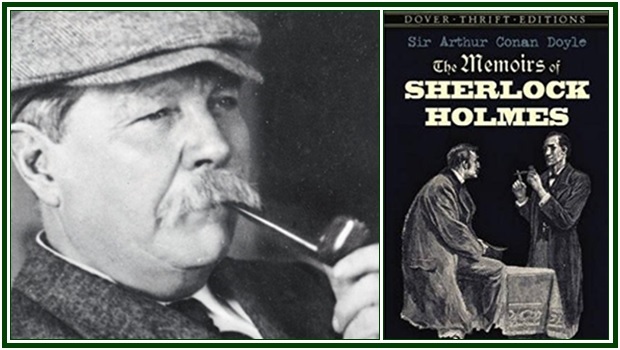 Regarding the fraud made against Helena Blavatsky, Conan
Doyle (1859-1930) lacked the investigative powers of Sherlock Holmes

British author Arthur Conan Doyle, who created the immortal detective Sherlock Holmes, personally met Alfred P. Sinnett - one of the pioneers of the theosophical movement - and had for some time a deep interest in esoteric philosophy.

Doyle found in theosophy various fascinating ideas present in his books. However, he did not have the investigative talents of his character Sherlock Holmes, and for this reason abandoned the theosophical movement. Doyle was naive enough to lose his confidence in theosophy after the publication of the notorious Hodgson Report, the false investigation and farce with which the Society for Psychical Research (SPR) of London “condemned” H. P. Blavatsky as a fraud in the 1880s.

Ms. Blavatsky, an unmarried woman writing in the 19th century, questioned the main scientific, cultural and religious dogmas of her time. It was both easy and convenient to personally attack her as a means to preserve the blind routine of that intellectual and religious world. One hundred years after the “condemnation” of Helena Blavatsky, the very Society for Psychical Research made an informal self-criticism, in April 1986, and published the essay by one of its leading members showing that Blavatsky’s accusers used falsehood and fraud in the charges made against her and the theosophical movement.[1]

In the 1880s, however, Conan Doyle believed at least in part in the political show created by the Society for Psychical Research. In his memoirs, Doyle says:

“I was deeply interested and attracted for a year or two by Theosophy, because while Spiritualism seemed at that time to be chaos so far as philosophy went, Theosophy presented a very well thought-out and reasonable scheme, parts of which, notably reincarnation and Karma, seemed to offer an explanation for some of the anomalies of life. I read Sinnett’s ‘Occult World’ and afterwards with even greater admiration I read his fine exposition of Theosophy in ‘Esoteric Buddhism’ [2], a most notable book. I also met him, for he was an old friend of General Drayson’s, and I was impressed by his conversation. Shortly afterwards, however, there appeared Dr. Hodgson’s report upon his investigation into Madame Blavatsky’s proceedings at Adyar, which shook my confidence very much.”[3]

Unfortunately, Conan Doyle had more in common with Watson than with Sherlock Holmes. Had he had the same eagerness to look for truth as the detective he created, he would have investigated the facts by himself and seen the sad fraud organized by Mr. Hodgson and the London SPR.

Conan Doyle wrote “The History of Spiritualism” (1926) and other books on the Spiritualist doctrine, such as “The New Revelation” and “The Land of Mist”.

Perhaps his most interesting book from a theosophical point of view is “The Maracot Deep”[4], a science fiction novel offering an imaginative version of the end of Atlantis. The book makes a thoughtful approach to the relation between the absence of ethics and moral values and the end of civilizations.

Another volume by Doyle which coincides with the writings of Helena Blavatsky and with the first books written by Alfred Sinnett is entitled “The Poison Belt”.[5] The story contains some elements of the warning made by Helena Blavatsky of a mysterious form of war that could instantaneously annihilate most of human kind. One of the implicit objects of the modern theosophical movement created by Blavatsky is avoiding this kind of war through the formation of a nucleus of universal brotherhood.

In the short-story “The Disintegration Machine” [6], Doyle anticipates in a humorous style the idea of tele-transportation, or dematerialization and rematerialization of objects.

The concept belongs to Raja Yoga and is present in the spiritual traditions of different nations. Carlos Castaneda describes it in some of his works. In present-day science, we have the idea of “quantum teleportation”. In the first years of the theosophical movement, a number of experiences in tele-transportation were described and discussed by Alfred P. Sinnett in his first books, which were based in “The Mahatma Letters”. The fact is discussed by Helena Blavatsky, who wrote:

“In the transport of inert substances, the atoms are disintegrated, and suddenly reformed at the point of deposit”. [7]

Doyle adapted the idea of teletransportation to the context of science fiction.

The creator of Sherlock Holmes was certainly an effective writer and a good-willing soul with a genuine interest in theosophy and the future of mankind.

[6] The story was published by the “Strand” magazine in January 1929 and included in the 1919 edition of “The Poison Belt”. It is now available online thanks to the Project Gutenberg Australia: http://gutenberg.net.au/ebooks06/0601391h.html.

The above article is a translation from “Conan Doyle Estudou Teosofia”. It was first published in English language on 9 April 2018. 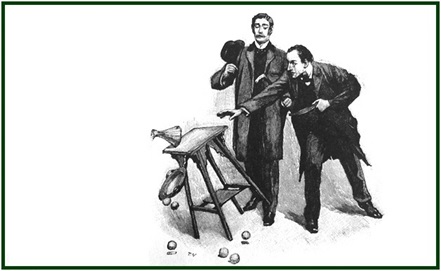 See also the text “The Philosophy of Sherlock Holmes”.