Respect for the Lower Self

A Deeper Look at the Path to Wisdom 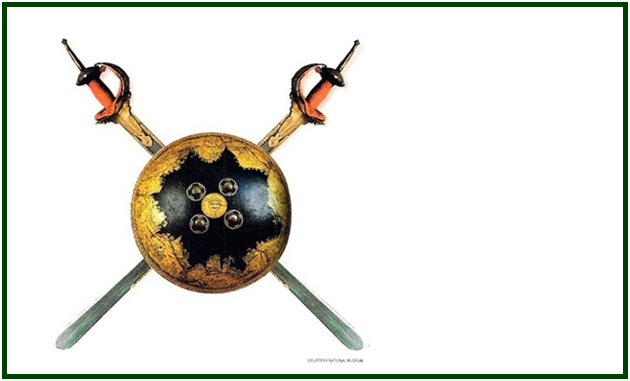 In ancient India, a Rajpoot Warrior took an oath by his sword, and his shield

It is not enough to stick to correct ideas.

It is also necessary to examine how we look at them. For a superficial or mechanistic view of correct philosophical concepts is more than enough to provoke disasters along the way.

People often talk, for instance, about the need for selflessness  and  self-forgetfulness in theosophy. These are two important ideas, which we must handle with care, because their foundations are a thorough knowledge and a careful control of oneself.

It is at “Letters from the Masters of the Wisdom” that a Mahatma quotes Alfred Tennyson while referring to three decisive factors in any theosophical effort:

True, a complete self-forgetfulness applies to one’s goals in life. At the same time, the lower self is the main outer instrument to be used by one’s selflessness, and it must be taken good care of.  It is only the ignorance temporarily present in the lower self that must be calmly fought, and gradually, peacefully annihilated. True self-respect implies having the right consideration for the vehicle which we call “personality”, since it is a most valuable level of intelligence, loyally trying to serve our highest consciousness.

Can we laugh at our own mistakes?  Yes, sometimes. But this should be done with moderation. The thoughts and actions of our personality must be in an expanding harmony with its sacred duty as the vehicle of an immortal Soul.  Our lower self is more than a “mask” and a “shell”. It is a shrine which can be protected from destructive influences and thoughts. And H. P. Blavatsky wrote:

“The ever unknowable and incognizable Karana alone, the Causeless cause of all causes, should have its shrine and altar  on the holy and ever untrodden ground of our heart.” [2]

One’s “lower” personality is therefore the temple and the tool of a sacred life. An important aspect of self-respect means that one must care for his lower self and for the state of its thoughts and feelings. It will improve not by hate. It will improve by esteem and consideration. Feelings, actions and ideas that are hostile to the personality’s role as a vehicle of the higher self should be recognized as disrespectful towards life.

Self-respect produces respect for all. It also demands a deeper consideration from anyone who is in a position to be accepted as one’s friend.  In every circumstance of life, the right relationship between one’s personality and other individuals must be based on the principle of mutual respect, not as mere social courtesy, but at the heart-level.

A decisive aspect of self-respect is directed at one’s monad.  It is the feeling that one naturally has for the voice of his own conscience, for his spiritual soul, the essence of his being, his immortal Atma.

Like any other form of light, respect must go in every direction.  Self-respect is the basis of that brotherly feeling one must have for all beings.  Both celestial and terrestrial aspects of human life deserve a friendly care, and these two dimensions of respect are inseparable.  In a way, human beings can be said to be the antahkarana, the bridge, among higher and lower levels of love for Life. The “individual” is above all the focus of that living consciousness which oscillates throughout the whole field of his own aura, and which includes it all.

If one adopts this multi-layered concept of self-respect, it becomes easy to see that self-discipline is not an act of force. It is not an imposition from the outside. It is instead an action which emerges from affinity with the idea of a correct life, a life dedicated to the sowing of good karma. Thus the practice of self-discipline can only express respect for one’s own personality.  To despise one’s lower self would be to show disrespect towards a sacred vehicle of universal life.

Rescued by a Master from a half-forgotten poem by Tennyson, these three factors of life seem to be a summary of the whole path to Raja Yoga: self-respect, self-knowledge and self-control.  Yet real progress is seldom effortless. Mind is like a sword, according to Zen-Buddhist tradition. In ancient India, a Rajpoot Warrior would take an oath by his sword and his shield. [3] And the Dhammapada teaches:

The fact of the matter about theosophy is that, while a true warrior loves his sword, an archer his bow, and a boatman his boat, a theosophist learns to love, respect and train his own lower self.

[3] See for instance the book “Annals & Antiquities of Rajasthan”, by James Tod.

The illustration that opens the present article is reproduced from the book  “Annals & Antiquities of  Rajashtan”,  by James Tod, Selected and Abridged by E. Jaiwant Paul, Roli Books, New Delhi, India, 2008, 141 pp.