Effects of Overindulgence in Sensuality

An Absence of Moderation Makes
It Impossible to Have Inner Peace
Pitirim A. Sorokin 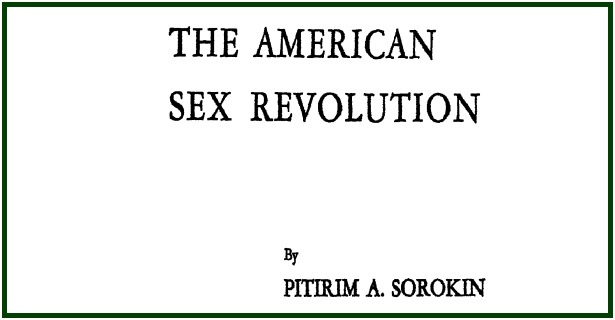 Overdeveloped sexuality is one of the main sources of neuroses and functional psychoses. Mental disorders may be caused through chronic and excessive consumption of alcohol which usually accompanies promiscuity, or through syphilis and other venereal diseases contracted through illicit relations.
In the integrated personality, the “higher self” with its moral and aesthetic values controls the lower “ego” and the animal drives. The inner world of the individual and his overt behavior are one orderly whole, free from major conflicts and contradictory motivations and actions, free from a multitude of tensions and stresses. Such a person enjoys peace of mind; he follows a clear-cut line of conduct determined by his system of values and his moral norms of ‘thou shalt’ and ‘thou shalt not’. He is insulated against most internal and external disintegrative influences. However trying and painful the strains of life, he bears them valiantly. Temptations to actions that contradict his code are unhesitatingly rejected, while calls to actions that are in accord with his “holy of holies” are joyfully accepted and, to a large extent, followed.
In contrast, the inner world and the actions of the libertine are a chaos. Lust dominates his thinking and feeling, and controls his overt behavior. Because his is an organism in a state of biological disequilibrium, he cannot control its processes for his well-being, nor can he resist the innumerable external forces incessantly bombarding it.  His potential ‘self’ and ‘rational ego’ do not effectively exercise their function of directing the organism.  His personality is undeveloped. His ego is shot through and through by innumerable tensions and conflicts; of his biological drives, one against the other, especially the preponderant sex drives against other urges; of the fragments of values and motivations with each other and with the biological drives; of his ‘self’ with his ‘ego’. He is tormented by feelings of guilt and remorse. His conflicting emotions and passions are continuously excited. He is a house divided against himself, whose various parts are at incessant war with one another. In such a condition he cannot achieve real peace of mind, and his malfunctioning organism and his splintered personality make him an easy prey for neuroses and functional psychoses.
The environment and mode of living of sex gluttons are saturated with intense strains, red-hot emotions, deadly conflicts. Their pursuit of pleasure necessitates continuous outbursts of lust, jealousy, anxiety, envy, fear, doubt, insecurity, hate. The hunt for new thrills is inseparable from these passions, which spring up now and then between sex partners and almost always between the profligate and the persons and groups whose vital interests are violated by his transgressions.
The slightest adverse event in the environment of the sex gluttons can precipitate a series of disintegrative personality changes. Disappointment, suspicion, failure, frustration, as well as the vulgarity, ugliness, and disease of their environment can precipitate neuroses and even psychoses.
000
The above article is part of the book “The American Sex Revolution”, by Pitirim A. Sorokin, 186 pages, 1956, which is available at the associated websites. See pp. 62-64.  The text was published as an independent item in the associated websites on 27 December 2021. It is also part of the September 2021 edition of “The Aquarian Theosophist”, pp. 7-8.
Read more:
* Is Family Life a Duty?.
* Family and the Sources of Life.
* Texts on the Family and the Path.