The Wisdom of Atlantis,
in Egypt and Central America
Helena P. Blavatsky 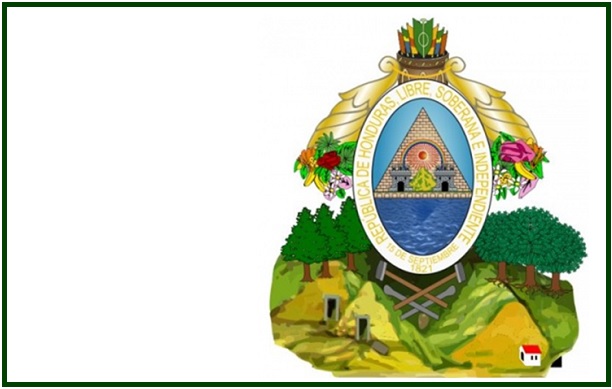 The Coat of Arms of Honduras, above, presents a
sun-disc in its center, in the middle of a pyramid or triangle.

Honduras is a Central American country. In
its forests near Guatemala, the ancient Mayan
ceremonial place named Copán has significant
stone monuments and hieroglyphics carved in stone.

Sun Gods are present in Central and North America, as
well as in the Andean region and the whole of South America.

“The ancient Egyptians
themselves were not an Atlantic colony.”


The following interesting letter was received by us from Fresno, California. As it is a private one, we can give but extracts from it.
“The other sides again contain ornaments and glyphic inscriptions, hitherto not read or deciphered. One pillar, not previously described, however, contains only hieroglyphics arranged on all sides. It seems to be a record, perhaps of laws, perhaps of historical events. This pillar is about 10 feet high, and the sides 3 and 4 feet wide respectively. But the most remarkable [feature] is that this pillar was covered by a cap in the shape of a very low truncate pyramid. On this pyramid was seen a forced dead head of colossal dimensions and surrounding the same was an expanded ‘sun-disc’, crowning the very cap. The rays of the sun-disc were distinctly marked. The similarity of the same and the sun-disc common in the Egyptian monuments was so marked, that it immediately struck me that the number of rays must be 17, the sacred number of the Egyptian sun-disc. Upon counting the rays they were found to be as expected - 17.”
“Now is this a pure ‘coincidence’, or is it another link in the broken and scattered chain, whose finding points toward an ancient connection between the Central American peoples, the Mayas and other races, and the Egyptians by means of a connecting Atlantis?”
“Another curiosity, naturally a ‘coincidence’, is worthy of notice. One of these sculptured personages dressed in priestly robes and holding in his hand a small square box, has his legs above the sandals ornamented with the CRESCENT. The same sign was used by the Romans to signify immortality and similarly placed above the sandals.”
“Cannot your trans-Himalayan Brothers give us any clue to these hieroglyphics inscribed on the Central American Monuments? Or have you no Psychometrists who could decipher them psychometrically. If anyone should be willing to try to do so, I would send him a small portion of one of the glyphs I have in my possession, and maybe some good will come out of it. E. G.”
The uniformity in the symbolic meanings of American antiquities, and of antiquities connected with the “Wisdom Religion” in Egypt or any other parts of Europe or Asia where they may be observed, is certainly far more remarkable than would be agreeable to theorists who wish to account for it by help of that hard-worked servant - coincidence. It has been traced with great patience through many different departments of archaeology by Mr. Donnelly in his recent Atlantis: the Antediluvian World.
The second part of the title of this volume, by the way, will not be quite acceptable to students of the subject who approach it from the side of occult science. The deluge is better left alone until cosmogony is more generally understood than at present. There is no one deluge that can conveniently be taken as a turning point in the world’s history - with everything before that antediluvian, and everything of later date - postdiluvian. There have been many such deluges cutting [off] the various races of mankind at the appointed time in their development. The situation has already been referred to in the “Fragments of Occult Truth”.
During the occupation of the Earth for one period by the great tidal wave of humanity, seven great races are successively developed, their end being in every case marked by a tremendous cataclysm which changes the face of the earth in the distribution of land and water. The present race of mankind, as often stated, is the fifth race. The inhabitants of the great continent of Atlantis were the fourth race. When they were in their prime, the European continent was not in existence as we know it now, but none the less was there free communication between Atlantis and such portions of Europe as did exist, and Egypt.
The ancient Egyptians themselves were not an Atlantic colony. Mr. Donnelly is mistaken on that point, but the Wisdom Religion of the initiates was certainly identical and hence the identities of symbolical sculpture. This is what the “Himalayan Brothers” say. Whether any of our psychometrists will see any further depends on the degree of their development. At any rate, we accept the offer of our esteemed correspondent with thanks and will expect the promised portion of the glyph, before we venture to say anything further.
000
The above article was published in the associated websites on 16 November 2021.
000
Vea otros artículos sobre La Sabiduría de los Andes (Textos en Varios Idiomas).