The Role of Tapas in Raja Yoga

A Few Paragraphs From a
Commentary to the Yoga Sutras
I.K. Taimni 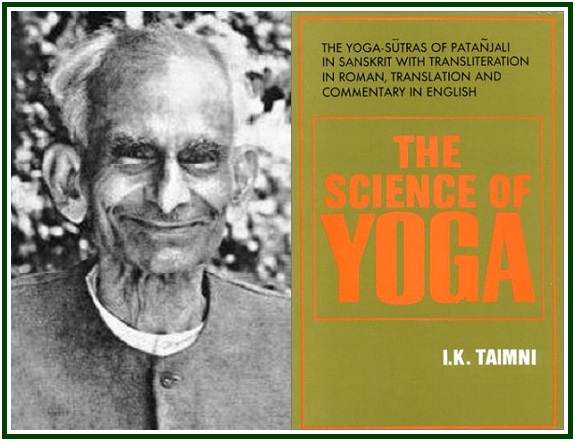 Dr. IK Taimni and the front cover of his good version of the Yoga Sutras
A 2020 Editorial Note:
Upon considering the topic of Tapas (Tapah) or austerities, one might observe these words from a Master, in Letter XLIX of the Mahatma Letters:
(Carlos Cardoso Aveline)
The Role of Tapas in Raja Yoga
I.K. Taimni
* Tapas is a very comprehensive term and has really no exact English equivalent. It combines in itself the significations of a number of English words: purification, self-discipline, austerity. The word stands for a class of various practices the object of which is to purify and discipline the lower nature and to bring the vehicles of the Jivatma [manifested Atma, individual soul] under the control of an iron will. (p.225)
* The systematic practice of Tapas generally begins with simple and easy exercises which require the exertion of will-power and is continued by progressive stages with more difficult exercises, the object of which is to bring about the dissociation of the vehicle from consciousness. (p.226)
* In the case of the ordinary man the consciousness is to a great extent identified with the vehicle through which it works. The practice of Tapas gradually loosens up this association, enables the consciousness to be partially separated from the vehicle and this progressive awareness of the vehicle as part of the ‘not-Self’ means attenuation of ‘Asmita’ or ‘I am this’ consciousness. It is only when this power to dissociate consciousness from the vehicles has been acquired to some extent that the “Sadhaka” [the practitioner] can effectively purify and control the vehicles and use them for the purposes of Yoga. (p.226)
* The Puranas are full of stories of people who obtained all kinds of Siddhis by performing austerities of various kinds and thus propitiating different deities. Those stories may or may not be true but that Tapas leads to the development of certain kinds of occult powers is a fact well known to all students of Yoga. The important point to be noted in this connection is that the Siddhis acquired by this method, unless they are the result of the general unfoldment of consciousness by the practice of Yoga, are of a restricted nature and do not last for more than one life. And it frequently happens that the person who acquires such a Siddhi, being morally and spiritually undeveloped, misuses it, thus not only losing the power but bringing upon himself a lot of suffering and evil Karma. [3] (p.382)
NOTES:
[1] “The Mahatma Letters”, Letter XLIX, or 49, p. 283. See also the article “How the Mysteries Are Taught”. (CCA)
The above article was published by the associated websites on 27 October 2020.
Examine the articles  “From Ritualism to Raja Yoga”, “The Awakening of the Third Eye”, “Good Sense in Approaching Raja Yoga” and “How to Develop Occult Powers”.

Regarding the path to wisdom and happiness, one should remember this phrase by Helena Blavatsky (photo): “Deserve, then desire”.