Challenge and Optimism in Israel

The Deeper the Ethics of a Nation, the
Greater Its Responsibility for the Common Future 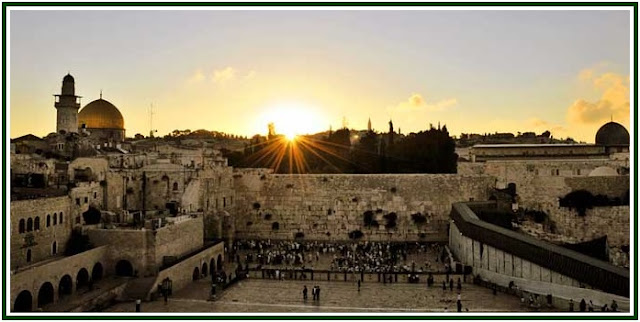 Jerusalem, the eternal capital of Israel

Anti-Semitism, the long-standing Western disease, is burning again before it gets healed.

Christianity, no doubt, is the main address and the birthplace of systematic ill-will and violence against the Jews.

It is only natural that from time to time such a self-defeating emotion gets stronger in Christian societies. Muslim hatred of Jews is often protected in a Christian atmosphere, and the disease will persist as long as the Church-inspired nations refuse to make a self-criticism.

They must place the ethics of life above sectarian interests and political power-struggle. Western culture will have to undergo significant changes before it learns to have more respect for truth, for intercultural diversity, and for the Jewish nation. Europe and the USA have quite a few lessons to learn in that department.

The situation is different and better outside the Western culture.

Eastern “pagan” nations as China, Singapore and India are loyal friends and partners with Israel at various levels. The friendship with the East flourishes.  In an April 2015 article at “The Times of Israel”, Avi Lewis reports:

“Analysts believe geopolitical trends are leading Israel to increasingly pivot east toward Asia, amid growing hostility toward the Jewish state from its principal trading partners in Europe.” [1]

It is more than a political and commercial fact.

Pre-Christian wisdom traditions have many a point in common with Jewish philosophy. Israeli partnership with non-Christian countries has a bright future ahead for a number of reasons. And Eastern nations play an increasingly visible role in the destiny of mankind. It’s no use trying to deny that, and Russia, one should remember, is half-Asiatic.

Those who would like to prevent the appearance of uncontrolled social-psychological mechanisms of fear and unrestrained military ambitions around the world in the years ahead can easily understand that it is not a healthy option to have a long, enduring nuclear arms race in the Middle East.

A threat in the air is sometimes worse than its actual fulfilment. Yet the shadow of nuclear war is floating over the Middle East already, in April 2015, and it should be dispelled before its fallout rains down onto outer reality.

The health consequences for human population in the Middle East and Europe in case of a nuclear war are rather unthinkable - not to speak of animal and vegetable realms.

It would be a large scale genocide across national and religious boundaries. Nuclear bombs are not local events. They are global. Other continents would get a severe fallout too. We must remember for instance Chernobyl, which was not even a bomb, but merely a peaceful accident.

It would be unrealistic to expect that the Jews will necessarily keep quiet while waiting for the Iranian bomb to be completed. Time has passed: no one is in the 1930s any longer.

Israel is not weak and it is not alone. It may have as many true friends now as in any other time. But as the Middle East gets closer to completing the first 70 years-cycle since 1948, Israel is paying the price for its growing importance in the world. The old politics of hypocrisy cannot be efficient in our planetary village any longer. Transparency is unavoidable in the 21st century, and this circumstance paves the way to a multidimensional strengthening of humanistic values. One should be prepared to walk a thorny path during the transitional awakening.

The Emerging Alliance in the Middle East

Inter-cultural respect is of decisive importance in the Middle East and around the world. Moderation in words enables one to be firm in substance, while preserving good will.

Egyptian cooperation with Israel, for instance, is most significant. It is not necessarily obvious, and there is no propaganda around it. Its silent nature may only add to its effectiveness.

If Israel, Egypt, Saudi Arabia and other moderate Arab countries show they have a common ground and mean business, the USA may be forced to change course and stop appeasing the Iranian Ayatollahs.

But Washington will need to see substantial facts of a preparatory nature, before it comes back to common sense and admits its mistake.

In inducing Washington to change course, Israel and moderate Arab states must avoid humiliating it. One must preserve the dignity of one’s adversary, and lead him into an honest policy - and not force him to radical or desperate measures.

In the Middle East and around the globe, a lasting safety for nations must result from mutual good will and from a balanced relationship.

There seems to be no cultural possibilities for cooperation between Israel and Hamas’ leaders or the Palestinian Authority. There is no point in talking to people whose main goal is to deceive and destroy you. On the other hand, important sections of the Arab population in the region do respect and cooperate with Israel, and are benefitted by it.

Such a grassroots goodwill gives us a correct portrait of the future in the region. While the policies of appeasement regarding terror or hatred-based campaigns are of no use, a community level inter-cultural cooperation must be forcefully expanded in the years ahead by those who want harmony in the Middle East.

Optimism and the Ultimate Source of Peace

With regard to the challenges faced by Israel in 2015, the planetary citizens might want to consider adopting the “tragic optimism” taught by Viktor Frankl.

Positive thinking is a duty, and it includes a severe examination of the dangers involved in the act of living. A well-known story illustrates that. At some point in the last two millennia, at a time that cannot be disclosed, a group of elderly men gathered each morning at a certain café in Tel Aviv.

They drank coffee and sat for hours discussing the world situation. Given the state of the world, the story goes, their talks usually were depressing. One day, however, one of the men startled the others by suddenly announcing:

His friends got shocked at such an absurd statement. One of them, however, noticed something fishy:

And the man answered:

Fear-based “pacificism” only expands cruelty and violence. The way one examines challenges must be fearless. On the other hand, the awakening of one’s soul is nonviolent.  In human heart we find the ultimate source of peace and optimism. The Jewish literature on ethics has the following passage by Irving M. Bunim:

“With a mitzvah, a meritorious deed, you bring light and life to the world; with a transgression you bring it some measure of death: by this much you defeat the purpose of creation. And a man, we have noted, is a microcosm, a miniature replica of the macrocosm, the world; moreover, in his tasks, his obligations, and his destiny, man  represents the essential purpose of the world’s creation and existence. Save a man’s life, and it is as if you have saved the world: it was created for him. Destroy man, and you destroy a world: you eradicate creation’s aim and goal.” [3]

“… Man is the temple of creation, so to speak, and the human heart is the holy of the holies. If we entertain thoughts that are immoral or emotions that are unworthy, it is as if we had defiled the Holy of Holies itself. To do this is to call down destruction upon the entire world. For man is the sole connecting link between heaven and earth, bearing within him the essence of all life on earth and all the spirituality in heaven.” [4]

Knowledge is inseparable from duty.

The deeper the ethics of a nation or individual, the greater its, or his, responsibility for the future.

Having been the object of an indescribable persecution for almost 2,000 years, the Jewish people has with it a large part of human impulse for redemption. Life is about ethics, duty, justice and responsibility; and not every new springtime starts always with fine weather.

[1] “Israel Joins China-based Fund Boycotted by US”, in “The Times of Israel”, April 2, 2015:  http://www.timesofisrael.com/israel-joins-china-based-asian-investment-bank/ .

The above text was first published in April 2015 at a theosophical blog in “The Times of Israel”: http://blogs.timesofisrael.com/challenge-and-optimism-in-israel/ .

See here the 1m30s video “The Healing Chain Reaction”, with a fragment from “The Fire and Light”: