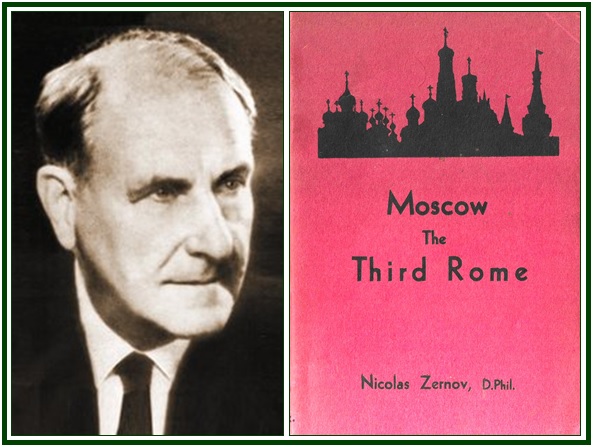 Nicolas Zernov (1898-1980) and the front cover of the present book
0000000000000000000000000000000000000000000
An Editorial Note
Nicolas M. Zernov was born in Russian on 9
October 1898 and lived many years in the United
Kingdom. While teaching theology at Oxford University,
Zernov wrote books about Christianity in Russia. [1]
It is not difficult to see the theosophical importance
of Russia. Helena Blavatsky referred to the Russian
nation as “the only country where the pure ideal of
Christ is still preserved”. And according to Alexei
Khomiakov, the Eastern Church - invisible, transcendent,
made of universal love - is “sustained by an inner spirit, the
living spirit of Christ”. Both statements can be seen with full
references in the article “Slavophilism and Theosophy”.[2]
(Carlos Cardoso Aveline)
000000000000000000000000000000000000000000000000000000
The Enigma of the Russian Church
“Moscow the Third Rome” is a title which means little to an English reader. It would probably suggest to him some obscure legend of early Russian history, hardly to be connected with the modern problems of Russian life.  And yet there are probably few subjects which have more direct bearing on the development of Russian religion, and on the destiny of the nation, than the belief in Moscow as the Third and last Rome, the successor and spiritual heir of Rome and Constantinople.
The Revolution which overthrew the Imperial power in 1917 marked an epoch, not only in the history of Russia herself, but also in her relations with other countries, for since then the attention of the world has been focussed on her social and economical problems.
(Nicolas Zernov)
Click Here to Read
‘Moscow the Third Rome’ in PDF
NOTES:
[1] See for instance “Three Russian Prophets”.
The first edition of “Moscow the Third Rome” (1937), as reprinted in the UK in 1942, was published in PDF in the associated websites on 10 October 2022. The book has 112 pages.
Read more:
* How We Fabricate Scapegoats.
* Russia: The Putin Interviews.
* Take a look at other texts on Russia, Theosophy and Helena Blavatsky.
000