Does the ‘Gita’ Say All that Mankind Needs?
Helena P. Blavatsky 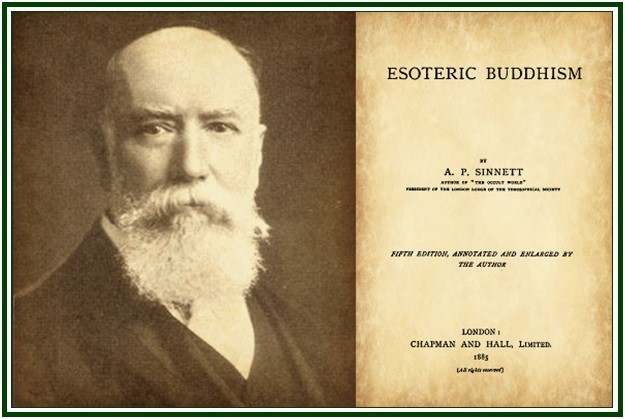 A.P. Sinnett and the opening page of his book, which is published in the associated websites
0000000000000000000000000000000000000000
An Editorial Note:
In February 1884, several years after the
foundation of the theosophical movement in
1875, William Judge still could not see the unique
significance of modern theosophy. Judge naively
believed, as shown  in the following article,
that the Bhagavad-Gita has all we need to learn.
Judge felt the book “Esoteric Buddhism” was
not quite necessary, although it consisted of direct
Letters from the Mahatmas. Helena Blavatsky
had to correct William Judge’s naiveté in public,
in a Note appended to his article. Read below.
(Carlos Cardoso Aveline)
000000000000000000000000000000000000000000000
The only fault I have to find with Mr. Sinnett’s book is that he too often says that: “this knowledge is now being given out for the first time.” He does not do this because he wants glory for himself, but because he makes a mistake.
The obscuration periods are most clearly spoken of (chap. VIII, p. 42): “Those men who know the day of Brahma, which ends after a thousand ages, and the night which comes on at the end of those thousand ages, know day and night indeed. - … . This collective mass itself of existing things, thus existing again and again, is dissolved at the approach of that night. At the approach of that day it emanates spontaneously.”
And in (chap. IX, p. 44): “At the conclusion of a Kalpa all existing things re-enter nature which is cognate with me. But I cause them to come forth again at the beginning of a Kalpa.”
Dhyan-Chohan state is given in the same chapter. “This they call the highest walk. Those who obtain this never return. This is my supreme abode.”
Re-incarnation is stated at (chap. IV, p. 24): “I and thou have passed through many transmigrations.” And the return of Buddha in the same. “For whenever there is a relaxation of duty, I then reproduce myself for the protection of the good, and the destruction of evil doers.”
Devachan is to be found in (chap. IX, p. 45): “These, obtaining their reward. … Having enjoyed this great world of heaven, they re-enter the world of mortals, when the reward is exhausted … they indulge in their desires, and obtain a happiness which comes and goes.”
That knowledge is more important than mere religious devotion, see chap. IV, p. 26, “If thou wert even the most sinful of all sinners, thou wouldst cross over all sin in the bark of spiritual knowledge.”
For those who will see, it is all in this wonderful book.
William Q. Judge.
2. Note by H.P. Blavatsky
We do not believe our American brother is justified in his remarks. The knowledge given out in Esoteric Buddhism is, most decidedly, “given out for the first time”, inasmuch as the allegories that lie scattered in the Hindu sacred literature are now for the first time clearly explained to the world of the profane.
Since the birth of the Theosophical Society and the publication of Isis, it is being repeated daily that all the Esoteric Wisdom of the ages lies concealed in the Vedas, the Upanishads and Bhagavad-Gita. Yet, unto the day of the first appearance of Esoteric Buddhism, and for long centuries back, these doctrines remained a sealed letter to all but a few initiated Brahmans who had always kept the spirit of it to themselves.
The allegorical text was taken literally by the educated and the uneducated, the first laughing secretly at the fables and the latter falling into superstitious worship, and owing to the variety of the interpretations - splitting into numerous sects. Nor would W. Q. Judge have ever had the opportunity of comparing notes so easily and, perhaps, even understanding many a mystery, as he now evidently shows he does by citing relevant passages from the Bhagavad-Gita, had it not been for Mr. Sinnett’s work and plain explanations. Most undeniably, not “nearly all” - but positively all the doctrines given in Esoteric Buddhism and far more yet untouched, are to be found in the Gita, and not only there but in a thousand more known or unknown MSS. of Hindu sacred writings. But what of that? Of what good to W. Q. Judge or any other is the diamond that lies concealed deep underground?
Of course everyone knows that there is not a gem, now sparkling in a jeweller’s shop but pre-existed and lay concealed since its formation for ages within the bowels of the earth. Yet, surely, he who got it first from its finder and cut and polished it, may be permitted to say that this particular diamond is “given out for the first time” to the world, since its rays and lustre are now shining for the first in broad day-light.
(Helena P. Blavatsky)
000
Both Judge’s commentary and Helena Blavatsky’s note are reproduced from “The Theosophist”, Madras, India, February 1884, p. 122, which can be seen in volume V of the magazine: CLICK HERE. The two texts are also reproduced at the volume VI, pp. 146-148, of the Collected Writings of Helena Blavatsky (TPH-USA).
Click and read the book “Esoteric Buddhism”, by A. P. Sinnett.
Read more:
“The plain unvarnished truth, which hurts no one save the man who denies it, is that H. P. Blavatsky was the head, front, bottom, top, outskirts, past and future of the Theosophical Society. We were all but pawns on the chessboard. What is the use of permitting vanity to influence us toward denying the facts?”
(Click to see William Judge’s testimony in the article “The Main Founder of the Movement”.)