Storks, the Phoenix, and Rebirth 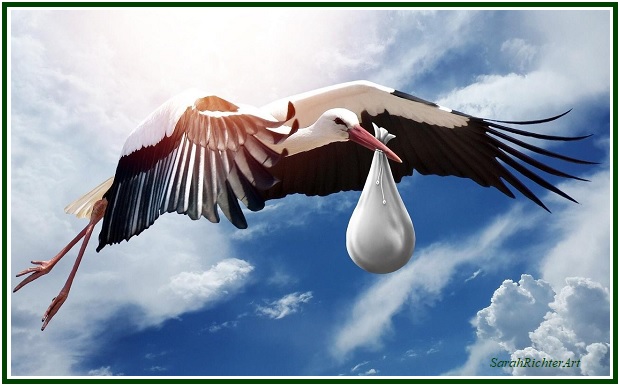 Self-delusion is often pessimistic, and misinformed people may believe that “life is too painful” and “the law of impermanence provokes suffering”.
Blaming “Kali Yuga” for human mistakes is particularly unintelligent. Every aspect of the universe evolves and learns under the blissful law of renewal and rebirth. Instead of complaining about difficulties, we should remember the philosophy of Epictetus and not lose energy with facts outside our field of action, but do our duty with regard to that which actually depends on us.
Bliss, not pain, is at the center of life.
Everyone can expand his connection to such center, and old forms are of course abandoned in due time so that a rebirth can take place. To each end corresponds a new beginning. Decay prepares renewal, and every night of time has a mission: its duty or dharma is to prepare the new morning.
Old myths are true in their own ways. The law of Karma, for instance, confirms the legendary fact that storks bring new babies from celestial regions, and deliver them to their proper families.
The stork is the popular variety of Phoenix. In Egyptian mythology, the reincarnating soul of a person was represented by a stork. Every 1,000 or 2,000 years - and sometimes 3,000 years, according to the Mahatma Letters -, the sacred stork or spiritual soul gives us a new baby as a vehicle to use in material life. Incarnations take place according to the evolutionary need of spirit.
Like the heron, storks are symbols of divine science. [1]
The Dharma of the Phoenix
Hans Christian Andersen wrote in a fairy tale about the phoenix:
“In the Garden of Paradise, beneath the Tree of Knowledge, bloomed a rose bush. Here, in the first rose, a bird was born. His flight was like the flashing of light, his plumage was beauteous, and his song ravishing.”
“But when Eve plucked the fruit of the tree of knowledge of good and evil, when she and Adam were driven from Paradise, there fell from the flaming sword of the cherub a spark into the nest of the bird, which blazed up forthwith.”
“The bird perished in the flames; but from the red egg in the nest there fluttered aloft a new one - the one solitary Phoenix bird. The fable tells that he dwells in Arabia, and that every hundred years, he burns himself to death in his nest; but each time a new Phoenix, the only one in the world, rises up from the red egg.”
Andersen goes on:
“… The Phoenix is not the bird of Arabia alone. He wings his way in the glimmer of the Northern Lights over the plains of Lapland, and hops among the yellow flowers in the short Greenland summer. Beneath the copper mountains of Fablun, and England’s coal mines, he flies, in the shape of a dusty moth, over the hymnbook that rests on the knees of the pious miner. On a lotus leaf he floats down the sacred waters of the Ganges, and the eye of the Hindoo maid gleams bright when she beholds him.”[3]
In a different story, Andersen discusses the difficulties faced by adult storks in educating their children. This is due, among other circumstances, to the fact that storks and young storks are sometimes ill-treated by humans. Our humanity has much to improve.[4]
The stork is a bird of good omen. It is a symbol of filial piety, for it is supposed that it feeds its old father. In some places it is said that one single glance from a stork can make a woman pregnant. In China, such a vitalizing power is attributed to the heron.
The stork, the heron and the ibis fight evil. [5] That may explain the obstacles faced by storks according to Andersen. The sacred bird ibis is extensively discussed in the book “The Secret Doctrine”, by Helena P. Blavatsky.
A life-giver like the phoenix, the stork is one of the most popular symbols of longevity. It is said that storks can live many hundreds of years. When a stork reaches the age of 600 years, it stops eating, and starts living on water only. This bird is especially admired by Taoist alchemists. [6]
Like the ibis, the storks express the eternally renewed wisdom and the energy of universal compassion. Students of esoteric philosophy can learn to be born again spiritually each day by living in syntony with these legendary birds.
NOTES:
[1] According to the entry for “Garça-Real” on page 460 in the book “Dicionário de Símbolos”, Jean Chevalier, Alain Gheerbrant. The volume was published by José Olympio Editora, 8th edition, Rio de Janeiro, Brazil, 1994, 996 pages. Original title, “Dictionnaire des Symboles”. Copyright in French, 1982. See also the entry for “Cegonha” on page 218.
[4] “The Storks”, in “The Complete Hans Christian Andersen Fairy Tales”, edited by Lily Owens, Avenel Books, New York, 803 pages, 1981, pp. 27-30.
The article “Storks, the Phoenix, and Rebirth” was published in the independent websites on 08 November 2021. An initial, anonymous version of it can be found in the June 2017 edition of “The Aquarian Theosophist”, p. 08, under the title “Storks, Babies and the Phoenix”.
Read more:
* The Process Between Two Lives.
* The Mystery of Alessandro Cagliostro.
* Video: The Healing Chain Reaction.
000