Man and Society in Calamity 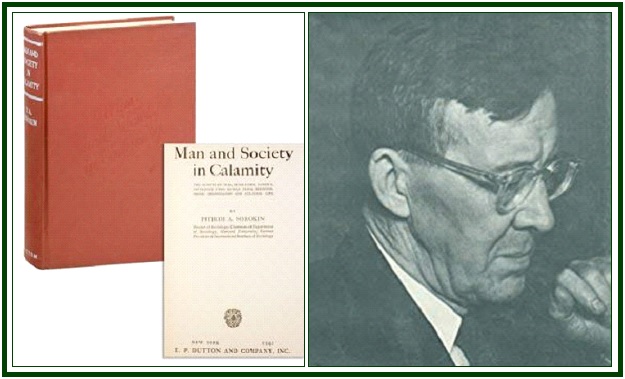 While reading the book it is useful to remember a few lines written by a Master of the Eastern Wisdom, or by one of his disciples under his orders or dictation. Published in the magazine “The Theosophist” in 1883, the words define the present age:

“We are at the end of a cycle - geological and other - and at the beginning of another. Cataclysm is to follow cataclysm. The pent-up forces are bursting out in many quarters; and not only will men be swallowed up or slain by thousands, ‘new’ land appear and ‘old’ subside, volcanic eruptions and tidal waves appal; but secrets of an unsuspected past will be uncovered to the dismay of Western theorists and the humiliation of an imperious science. This drifting ship, if watched, may be seen to ground upon the upheaved vestiges of ancient civilizations, and fall to pieces. We are not emulous of the prophet’s honours: but still, let this stand as a prophecy.” [1]

Sorokin opens the Preface to this 1942 book with rather similar words, as he refers to the sociological aspect of our deep planetary change:

“We live and act in an age of great calamities. War and revolution, famine and pestilence, are again rampant on this planet…”

Born in Russia on 21 January 1889, Pitirim Sorokin lived up to 1968. When this book was published, he was Doctor of Sociology, Chairman of the Department of Sociology in Harvard University, and former president of the International Institute of Sociology.

In “Man and Society in Calamity” he discusses the actual dynamics of worldwide catastrophes and the way individuals and nations experience them. His work is a practical tool for people living in a time of rapid planetary change.

Man and Society in Calamity

We live and act in an age of great calamities. War and revolution, famine and pestilence, are again rampant on this planet. Again they exact their deadly toll from suffering humanity. Again they influence every moment of our existence: our mentality and behavior, our social life and cultural processes.

Click to read the book
“Man and Society in Calamity”

The book “Man and Society in Calamity” was published at the associated websites on 9 March 2020.

“The Five Dimensions of Love”, “Change in the Poles of Our Planet”, “A Global Karmic Fever”, “A Lever to Move the World” and “An Old Celtic Legend of Atlantis”.

Take a look at the book “The American Sex Revolution”, by Pitirim A. Sorokin, and the article “Human Ethics and Earthquakes”, by Damodar K. Mavalankar.

Click to see the list of texts in the section “Planetary Change and The Civilization of the Future”.
000