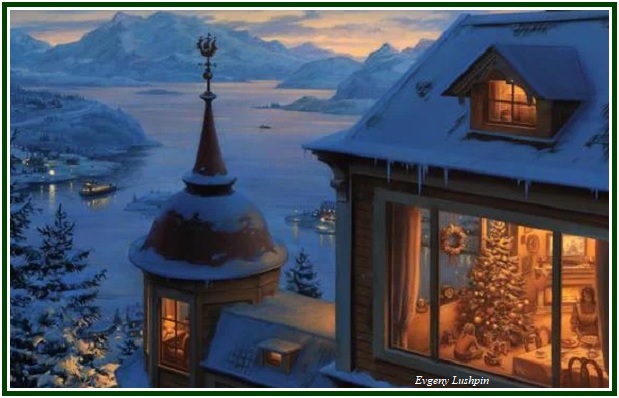 The general idea of the origin of Christmas is that the 25th day of December was made notable by the birth of Jesus of Nazareth; and in commemoration of that Being, so divine as to be called the Savior of mankind, the Christ Mass is a season for the giving of gifts - also, for the expectation of receiving them, one might say, for men have lost all sense of the true meaning of Christmas.

Even as a matter of fact, we know nothing whatever of the birth of Christ. There is no historical record anywhere of His birth at such a date; yet, the choosing of this season of the year for the birth of a Divine Being is really based on fact - a fact that belongs to the ancients.

The Christmas idea is borrowed from those whom we choose to call the pagans, as indeed have all our theological ceremonies, rituals and ideas. Ages before the time of Jesus Christ, among all the ancient peoples, were ceremonies at this season of the year similar in kind to our own, which had reference to a certain occurrence in the events of time. For it is then that the Sun itself returns from its journey southward to the north again - and this coming of the Sun was understood to be the birth of the Sun.[1]

But the Christmas season has its own peculiar occult reference. It is the season of the birth of the Sun - the coming back and bringing into fructification those seeds and plants needing Sun energy for their growth and expression - but, it is more than that, because behind the Sun, as behind every single body, there is spirit, there is life, and there is intelligence. So, there comes with the return of the Sun a spiritual, a mental, a moral growth and uplifting.

There is a springtime not only in the lower kingdoms - among plants and animals - but among men. There is an incursion of energy, so to speak, which if we could take advantage of would enable us to do much more than we now do. But we have lost the knowledge that we had. We have forgotten, and so we do not apply to ourselves the fact of the recurrence of this real Christmas time - the season, not only of the physical renewal of the earth and all beings [2], but also a return of the inner life, and of impulse of a spiritual kind.

Between Christmas Day and the day called Easter - which again has its own significance - the life of the earth is young. Then, too, the inner life has its rejuvenescence and its growth, and ideas then taken hold of and carried into expression have ten-fold the power which they would have at another time. Christmas is a season of birth and of growth; it is the season of the rebirth of the spiritual nature, and the birth of Jesus was made to accord with this old knowledge of the past and ancient observances.

The whole of life has its recurrent way as well as its recession. Day and night, summer and winter, life and death are the seasons of nature. But the perceiver - the experiencer - of those seasons is the self-conscious Man, who lives when the body dies, who is awake when the body rests at night, who is continually observant whether the body is awake or asleep.

The Man is conscious every moment. He sees recurrent waves of activity of one kind, then rest; he sees other kinds of activity, then rest.  He sees the return of his thoughts and his feelings, reinforced and strengthened on the second coming or reduced and weakened, according to the degree of energy he has given them. For always there is the return of impressions - from hour to hour, from month to month, from year to year.

It is the course of all beings of every kind to follow the law of action and reaction - to proceed through the coming back of that which was before plus whatever has been incurred in the meantime - and there is no cessation of this law; there is an eternality of progress, which is not restricted to any particular form and which is within the means and reach of every individual in every part of the universe. So, we cannot work for ourselves alone, nor progress by ourselves alone, but taking advantage of all recurrent waves and seasons of uplift we may go on from plane to plane, from state to state, from quality of being to quality of being.

There is a tide in the affairs of men which, taken at the flood, leads on to fortune, it is said - which is merely an expression and recognition of the same law of recurrent impression. For the opportunities of each life come from the past; each life as it is has been produced by the life or lives preceding, and aspirations are recurrent ideas of the past. Whenever there is a spiritual idea in the heart or in the mind, then is the beginning of the rising tide for that individual; then is the time for him to take advantage of the cycle - to make every possible effort in the direction of his purpose.

For the time is ripe, and the time will pass again just as surely as the Sun moves northward and then south again; and in that time of rising tide, we must have acquired the stamina - the power of concentrated effort which will hold us through the receding tide and give us a better standing place when the tide again rises.

There are also tides in nature for races and civilizations. Every civilization has its beginning and its ending. This present civilization will end as others before it have ended. No civilization, however great, will ever continue as such, because it merely represents a state of mind and a body suited to it, and it must reach its limit of expression to then die out. The individuals who made that race, however, will come again with whatever they have gained; they will come on a better basis and from there go on a little further.

There is a rising tide in the birth of a nation, and all through its life are various tides rising and falling. For us now, a tide of recession has prevailed through many centuries. We are living in the Iron Age, which was preceded by other better Ages known as the Gold, the Silver and the Bronze Ages. It is a hard and cruel Age - an Age of spiritual darkness - but in it we have to found all that existed in the other Ages; we have to bring into expression all that existed before, and put the very highest of all that preceded into practical use. Not only have we to pass through this Iron Age with all the aspirations of the other Ages, but we must start a new Golden Age with all that we have gained.

At the present time all our discoveries, our science, our religions, our social and national life are material, without spirituality. The more the self-conscious spiritual man has gone into matter, the more he has closed his spiritual doors, because his self-consciousness and energy have been put into the lower kingdoms.

But he must go through these stages and emerge from them, bringing with him all the knowledge he has gained thereby; and not only is his effort to gain knowledge for himself, but also to impart his feeling and understanding to the kingdoms below him in the matter which he uses. Then when he moves up the scale of being, that matter, too, will be lifted up and fitting for his use.

In the receding tide, old theological ideas have lost their sway over the minds of men. Minds are searching in every direction for that which is stable, permanent and true; they are looking for a knowledge which is feasible and practical. And a tide comes for the presentment of such knowledge. A tide comes for Beings greater than we are, because at some time They took advantage of the rising tide to go far beyond where the ordinary man found himself able to go. Those Beings come at certain great seasons, as the heavens tell the story in the Messianic cycle.

The passage of the Sun from one sign to another of the Zodiac takes a period of about twenty-one hundred years - the cycle of coming of a great Teacher. We need only to know that a great Teacher existed at some time here to count forward or backward and known when another has been or will be.

The real Christmas can come to us in our hearts. We can realize that there has come once more the season we can rise with. If we make up our minds to do it, we can follow the Path of our great Predecessors - the great Saviors of the world, the great Saviors of all times, for They all come from the same Body, whether we call them Buddha, Jesus, or any other name. They are all Beings of the same nature who come among us, and, as was said of Jesus, in all things become like unto us that They may impart to us something of Their great knowledge and point us to the Path They followed.

Always the object of Their coming was that we in time might become even as They are. Always They left messages for us which were set down and known as the sayings of the Founders of all the great religions. Jesus for Whom the Christian nations celebrate Christmas, was one of a Body of perfected men. There were many others before Him; there have been others since; there will yet be others.

Christmas is a time for giving and also for receiving. But there is a giving that is not of things. There is a giving of the heart itself. There is the giving of service, of love, of brotherhood, of every thought that makes for good - a giving open to all, however poor our personal possessions may be.

It is the feeling and the thought in our hearts which reach people and stir their hearts to a better perception, a better feeling, a wider and stronger action, for all our hearts are based in the same One Life; we draw all our powers and forces from the One Life. The Real Christmas means something to the Real Man, and it applies to the whole of man’s nature. Let us take advantage of the resurgence of spiritual, mental, and moral force that comes with the Christmas time.

[1] From the point of view of the Northern Hemisphere. (CCA)

[2] The vast majority of the world population and most of the territories are in the northern half of the globe. (CCA)

The above article was published at the associated websites on 22 December 2019. It was reproduced from the December 1920 edition of “Theosophy” magazine, Los Angeles, pp. 33-36. The text was first taken from the stenographic report of a talk by Robert Crosbie.

A contemplative study: “The Magic of the End of the Year”, by CCA.

Seeing the essence of things: “Christmas as a Lesson in Simplicity”, “The Symbolism of Judas Iscariot”, and “Wherein Is Love, Therein Is God” (the story by Leo Tolstoy).

On Facebook, readers are invited to like and join  E-Theosophy, The Aquarian Theosophist, Art and Theosophy, Helena Blavatsky, Theosophy and Future, Carlos Cardoso Aveline  and Theosophy Online.