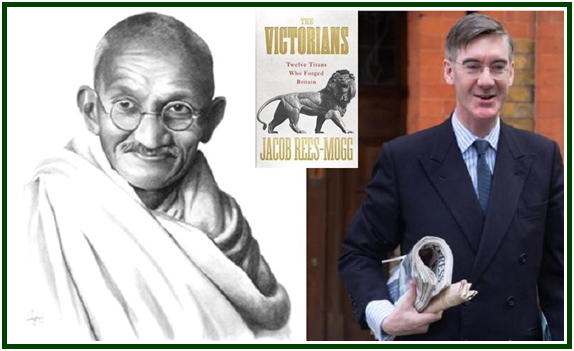 Jacob Rees-Mogg has something in common with Mohandas Gandhi

“The Victorians”, the book by Jacob Rees-Mogg, has widely succeeded in irritating literary critics and professional historians.

The author, a conservative politician, had the inacceptable (to some) idea of writing a book about the moral, constructive and idealist side of Victorianism.

Rees-Mogg dares speak from a refreshingly personal point of view of the glorious side of the United Kingdom during 19th century. His 440-page volume was published in 2019 with the subtitle “Twelve Titans Who Forged Britain”.

Why did the book get severely attacked? There may be one basic reason. According to globalism, no one should love his country or its History too much. It is “absurd” to defend his nation as an independent state. No individual is supposed to resist international money, global consumerism or the destruction of local culture.

“The love of nations is wrong in my opinion; therefore it should be suppressed”, as some globalists think. Writing a book on the positive aspects of the history of one’s country is therefore something to be rejected in the name of good taste and post-modernity.

From a theosophical perspective, however, universal brotherhood needs sovereign nations and cannot prosper except with mutual respect among ethnicities.[1]

Planetary fraternity requires the system of checks and balances provided by strong independent - and interdependent - communities. That is the idea inspiring the United Nations, fragile as the UN may seem to be by now.

Reality is complex, and the British Empire did not make mistakes only. It largely preserved cultural diversity and liberty of thought. Its project had many a bright aspect, and its accomplishments deserve being known and studied, side by side with its mistakes. The same applies to every country around the world.

The very idea of sovereign nations is being questioned - and derided - in our century. Yet trying to suppress nations or the love for them is no brotherly attitude, and shows no respect for facts. Any strong attempt to suppress nationalities could only lead to more acts of violence. It would stimulate organized crime and sickly reactions as xenophobia and racism.[2]

Good sense invites us to remember that human karma is not just a causeless chaos. The accumulated experience of mankind organizes itself along ethnical lines and national scenarios.

Human communities have their own unique chains of causes and effects. Local cultures and the circles of national karma and affinity cannot be suddenly obliterated from the outside. The way to planetary brotherhood is not to dream of annihilating the independence of countries or erasing social classes. It consists instead of stimulating goodwill and cooperation among strong communities.

“It is impossible for one to be internationalist without being a nationalist. Internationalism is possible only when nationalism becomes a fact, i.e., when peoples belonging to different countries have organized themselves and are able to act as one man.”

“It is not nationalism that is evil, it is the narrowness, selfishness, exclusiveness which is the bane of modern nations, which is evil. Each wants to profit at the expense of, and rise on the ruin of, the other. Indian nationalism has struck a different path. It wants to organize itself or to find full self-expression for the benefit and service of humanity at large.” [3]

The independence of nations is something to be protected not only for the sake of preserving freedom or strengthening democracy and the cultural heritage of communities, but for spiritual reasons as well.

A globalist dictatorship based on collective mind-domination via electronic gadgets corresponds to a sad dystopia whose danger was accurately described by George Orwell. The universal reign of political correctness is not welcome to the growth of human soul. The bad news for negative-thinkers is that such a nightmare has no chance of actually taking place.

By being a friend of one’s own nation, one loves mankind best. Loyalty to our country is the first step in being a friend of all nations. Strengthening the local community is part and parcel of universal brotherhood.

[1] The fact that theosophy includes love and respect for countries and does not promote the unwise idea of suppressing cultural diversity is documented in Section Three of “The Key to Theosophy”, by Helena Blavatsky, for instance; and in Letter LXXXI, p. 384, of “The Mahatma Letters”.

[2] As to the contemporary scene of materialistic dispute among nations around the world, it is worthwhile to examine the various books by James Rickards, including “The Road to Ruin”.

Click to see the article “Of Globalism and Brotherhood”. Read “Nationalism and Internationalism”.

“On Loving One’s Country” was published in the associated websites on 23 June 2019. Click to see the text at the theosophical blog in “The Times of Israel”, and in the June 2019 edition of “The Aquarian Theosophist”.