The Light and Power of Jupiter 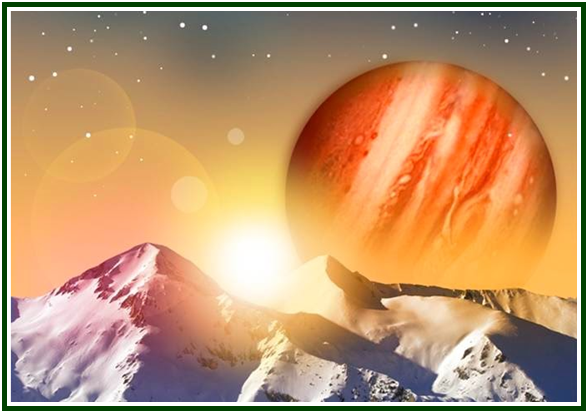 There is in the sky a gigantic source of faith in ourselves, travelling above us since ages untold. The powerful planet Jupiter, the master of optimism, spends one year in each sign of the zodiac and has a direct relation to religion and philosophy.

The energy coming from the collective intelligences of this celestial giant expands one’s view of things and stimulates positive action. It spreads that feeling of universal friendship towards all beings that was taught in the ancient Pythagorean School, and which constitutes the primary goal of modern theosophical movement.

Fifth planet from the Sun, Jupiter is much more evolved than our Earth, according to theosophy. However, Helena Blavatsky writes:

“If, for instance, the Esoteric Philosophy teaches that the ‘Spirit’ (collectively again) of Jupiter is far superior to the Terrestrial Spirit, it is not because Jupiter is so many times larger than our earth, but because its substance and texture are so much finer than, and superior to, that of the earth.” [1]

The ruler of Sagittarius and co-regent of Pisces, Jupiter takes 12 years to complete its rotational cycle around the Sun. Its astrological influence over individuals and communities stimulates the ability to build new structures. The planet protects those who believe in themselves and in universal wisdom. However, several challenges emerge as its divine influence meets our humanity. One must avoid indulgence and keep away from exaggeration. We need to have the proper amount of moderation and self-restraint.

“Historically, Jupiter has been associated with the king, the patriarch, and the chief god in various pantheons. It has also been associated with the principle of divine preservation and bountiful increase, being known as the ‘greater fortune’, or the ‘greater benefic’ planet, as distinguished from the ‘lesser benefic’ Venus. It has long been regarded as the patron of philosophers, theologians, moral leaders and crusaders, and speculative thinkers of all kinds. The grandeur of ancient people’s vision of Jupiter is hard to us to imagine today, and it is probably impossible for us to feel the awe with which such a cosmic force (or deity) was experienced.” [2]

“… If Mars has been shown (…) to have been regarded by the [ancient pagan astrologers] simply as the personified strength of the one highest impersonal Deity, Mercury [is] personified as its omniscience, Jupiter as its omnipotency, and so on”. [3]

A comparison with Saturn is also helpful.

While Jupiter is the planet of Dharma and potentiality, Saturn is the master of Karma and responsibility. Jove talks to us about the building of the future; the lord of the rings shows us lessons from the past.

Saturn, Jupiter and the Solomon Seal

Jupiter gives us confidence in Life; Saturn transmits prudence and perseverance. One invites transcendence; the other one demands respect for order and structures, and lets us know how best to build on firm soil. The two teachers work in unison with the rest of the solar system: our celestial village is an esoteric school - a school of souls.

The Omnipotency of Jupiter helps human beings become conscious of their unity with the universe. Yet ethics is as important as optimism. Blavatsky quotes these words from Eliphas Levi:

“In theological symbolism ….. Jupiter [the Sun] is the risen and glorious Savior, and Saturn, God the Father, or the Jehovah of Moses.” (‘Dogme et Rituel’, ii)

Helena Blavatsky highlights the fact that Son and Father, Jupiter and Saturn, “are thus one”.[4] In his 1996 book on Jupiter, Stephen Arroyo reminds us that the Saturn’s symbol is “essentially that of Jupiter upside down”. [5] 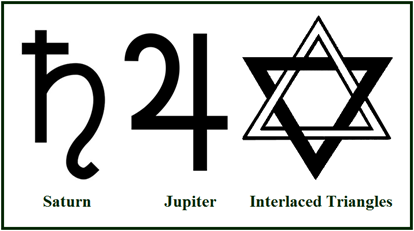 The sacred polarity corresponds to the two interlaced triangles of the Solomon Seal or Sri Yantra of Hindu tradition, one pointing optimistically to the sky, the other sternly indicating the Law on the Earth.

A Mahatma of the Himalayas explains:

“….The double triangle viewed by the Jewish Kabalists as Solomon’s Seal, is, as many of you doubtless know the Sri-Yantra of the archaic Aryan Temple, the ‘mystery of Mysteries’, a geometrical synthesis of the whole occult doctrine.”

And the Eastern sage adds:

“The interlaced triangles - the upper pointing one - is Wisdom concealed, and the downward pointing one - Wisdom revealed (in the phenomenal world). (….) Each triangle is a Trinity because presenting a triple aspect.” [6]

In order to have a lasting Optimism as taught by Jupiter, one must study and learn the lessons of realism and self-responsibility, whose teacher is Saturn. There is no bliss unless we deserve it. Jupiter gives enthusiasm to Saturn in one’s own soul, just as Saturn helps Jupiter in our lives, giving it prudence and method.

“In contemplating the profound qualities and aspirations that Jupiter represents in astrology, I cannot help but feel that Jupiter’s bigness and broad vision is inextricably linked to the perennial human search for a larger truth and for an experience of oneness with the universe. In perhaps no other planet (and in no other sign than Jupiter-ruled Sagittarius) do we find such a natural, spontaneous, and obvious intermixing of the physical and the non-physical; the material aspiration to improve one’s situation is combined with a redemptive preoccupation with uplifting dreams, ideals, inspirations, and ethical causes.” [7]

Jupiter, the Saviour, helps bring about a blessing synthesis between earth and sky.

It combines material existence with spiritual transcendence, and improves spontaneous action as long as there is also self-restraint. When the lessons of Jupiter are correctly associated with those of Saturn and other teachers in the solar system, people begin to practice a generous renunciation to material covetousness and exaggeration, while expanding wisdom and contentment in the unlimited realm of souls.

The Road to Contentment

From the point of view of esoteric philosophy it is wrong to think, as Stephen Arroyo seems to do, that the influence of planet Mercury represents the lower mind, while Jupiter’s energies express universal intelligence.[8]

Dane Rudyard and other significant astrologers also link Mercury to the “analytical mind”. This may be good enough for the short term psychology of personalities. It is not accurate in the context of a theosophical view of Astrology, for theosophists cannot deny or forget that all celestial bodies of importance are septenary.

In esoteric philosophy, each planet is complete with all levels of consciousness. Mercury, the divine messenger of the gods, is a fully enlightened planet, although it also inspires an ambiguous, fragmented vision of life, whenever the focus of the soul is on the lower realms of perception.

Mercury is in no way limited to the lower mind, just as Jupiter is not limited to higher levels of perception. The Sun, the Moon and all planets in our system influence both Buddhi-Manas (universal mind) and Kama-Manas (animal mind). Of course they also produce effects on the physical aspects of existence.

However, Arroyo is right in seeing a strong influence from Jupiter on the elevated levels of human thought.

“An especially important feature of Jupiter’s nature in mythology, as well as in the interpretation of Jupiter in astrology, is the link between Jupiter and what was often traditionally called ‘higher mind’.” And Arroyo clarifies that Jupiter’s “higher mind” is not irrational; it is a form of reason, but inspired reason. [9]

The influences irradiated by the planet have much in common with modern theosophy. Donna Cunningham uses the following key-words to describe Jupiterian action:

“Where we seek truth; philosophy, religion; knowledge, wisdom; the higher mind; the teacher.” [10]

Mythology is closely connected with astrological insights, and Isabelle Pagan wrote in the book “Signs of the Zodiac Analysed”:

“Jupiter is thus the ruling representative of the ‘Divine Mind’ in the mythology of classic times, and is consequently hailed as ‘Optimus Maximus’. His Greek counterpart is spoken of with equal reverence; for the Zeus of Homer is the Greatest and the Best, and the most to be revered of all the deities; the God of Light, of Justice, and of Truth; the Father of Gods and of men. He dominates all the planes, because his thought comprehends all things. One vibration of his mighty will makes the whole universe tremble.” [11]

Thought comes before actual facts. It paves the way to them. It prepares actions. Clouds of right thought will “rain” sooner or later as facts over the soil of outward reality.

If ideas precede events, it must be safe to say that optimism plants the seeds of happiness.

Jupiter, the planet of the future, transmits a philosophical confidence in Life. It invites mankind to tread the road to contentment while learning the lessons of the other teachers in the sky.

Redeeming the Blissful Aspects of Jupiter

In order to improve its Karma, humanity must improve its interaction with the subtle dimension of our solar system.

The way our civilization relates to the astrological influences coming from planets, and the manner we as individuals generally look at the “teachers in the sky” are both wrong. Jupiter is an example of that.

“Many of the most positive expressions of Jupiter are out of fashion in this era, for Jupiter’s concerns are in many ways the opposite of Mercury’s rationalistic, analytical interests and detailed approach to life.”

We have seen above that as a matter of facts Mercury is not in any way limited to an “analytical approach”, except when seen from the point of view of the lower mental plane. In the same manner as the higher influences from the various planets are blocked by the Karma of human ignorance, also Mercury is ignored and distorted in its higher aspects.

Arroyo makes a vigorous defence of the noble aspects of our biggest planet:

“Such [Jupiterian] subjects and qualities as ethics, nobility, forthrightness, altruism, and high-mindedness have in fact almost a quaint, old-fashioned ring to them today, so thoroughly has the media, along with the educational establishment, buried such lofty concerns in scorn and derided them as irrelevant to our ‘scientific’, individualistic (i.e., egocentric) age.”

Unable to see Jupiter in its truer and higher aspect, our civilization interacts with it in unfortunate ways.

Arroyo adds in a footnote:

“Many of Jupiter’s most negative manifestations, however, are emphasized, idealized and even promoted in the world today: self-righteous, intolerant religious beliefs; greed and ‘lifestyles of the rich and famous’, the cult of celebrity as a treasured goal in itself; an over-extended, wasteful lifestyle that constantly pulls one away from one’s center and from one’s duties toward such ‘trivialities’ as children; excessive growth and development, at the expense of the living atmosphere, the architectural heritage, and the environment, etc. One might even say that the negative expression of Jupiter is exemplified in Western society today.” [12]

In our constant dialogue with the planets of this solar system, it is the duty of each one to redeem and expand the sacred aspects of his individual interaction with the cosmos.