The Cosmic Creation in Every Foetus

And the Cyclic Art Of Being Born Again 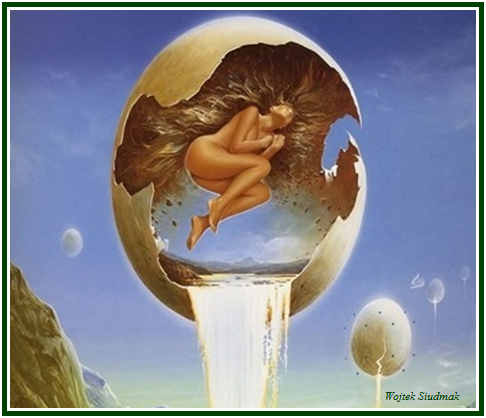 According to an ancient axiom, the whole is present in each one of its parts. The idea is not always easy to understand. How exactly can a human being be present in each of its own living cells, or the unlimited universe pulsate in every atom?

The secret relationship between macrocosm and microcosm contains the mysteries of great initiations. It cannot be explained in words, but words are useful tools as we investigate it.

In the 19th century, a Western lay disciple asked to an Eastern Raja Yogi:

“Does every mineral form, vegetable, plant, animal, always contain within it that entity which involves the potentiality of development into a planetary spirit?”

And the Master answered:

“Invariably; only rather call it the germ of a future entity, which it has been for ages. Take the human foetus. From the moment of its first planting until it completes its seventh month of gestation it repeats in miniature the mineral, vegetable, and animal cycles it passed through in its previous encasements, and only during the last two, develops its future human entity. It is completed but towards the child’s seventh year. Yet it existed without any increase or decrease aeons on aeons before it worked its way onward, through and in the womb of mother nature as it works now in its earthly mother’s bosom.”

And the Mahatma added:

“Truly said a learned philosopher who trusts more to his intuitions than the dicta of modern science: ‘The stages of man’s intra-uterine existence embody a condensed record of some of the missing pages in Earth’s history.’  Thus you must look back at the animal, vegetable and mineral entities. You must take each entity at its starting point in the manvantaric course as the primordial cosmic atom already differentiated by the first flutter of the manvantaric life breath.” [1]

In the same letter, the Master said:

“The myriad specific manifestations of these six universal elements are in their turn but the offshoots, branches or branchlets of the one single primordial ‘Tree of Life’. Take Darwin’s genealogical tree of life of the human race and others and bearing ever in mind the wise old adage, ‘As below so above’ - that is the universal system of correspondences - try to understand by analogy. Thus will you see that in this day on this present earth in every mineral, etc., there is such a spirit. I will say more. Every grain of sand, every boulder or crag of granite, is that spirit crystallized or petrified.” [2]

Finally, the Mahatma asks to his disciple:

“How then can we doubt that a mineral contains in it a spark of the One as everything else in this objective nature does?” [3]

On Talking to the Sun and Being Born Again

Big and small are analogous. Just like the planet Earth, each human being is a sort of “general assembly” gathering together an immense diversity of lives. One’s individual consciousness presides over a vast federation of thoughts and feelings, not all of which belong to oneself.  Theosophy teaches that humans have seven “principles” or levels of consciousness, and each of them, seven sub-principles. These 49 (7 x 7) levels of life in fact are universes of their own. They are never separated. They always interact among them in a thousand ways.

One has an emotional universe and an intellectual universe, and no boundaries separate them.

Each cell in the human body has its own form of intelligence, and its habits. Hosts of “beings” inhabit one’s lower self-emotions, one’s animal life and self-preservation instincts. From our higher self, generous thoughts and emotions come which are “inhabited” by correspondingly noble forms of vitality.

Every day some of the old and ignorant forms of life must die, so that they will not repeat themselves. Each new hour some wiser forms of life can be created as we make progress along the path to wisdom.

One also learns during sleep. Upon awakening in the morning one might think of the source of light, both physical and spiritual - and say to oneself:

“I ask my elder brother, the Sun, to enlighten in this day both wisdom and ignorance in myself, so that ignorance can die a peaceful death and wisdom may be born.”

To commit oneself to life is the same as committing oneself to truth. It implies a cosmic or planetary rebirth in one’s consciousness.

According to Theosophy the inner Sun is both the source of Truth and of Life. It shines in every human heart, and the path to wisdom is the solar path.  Initiations along it - big and small - are rebirths.

In ancient times, the Eastern Initiates were called Dwijas in Sanskrit; the twice-born, those who were born first physically, and then came to life again in the spiritual world.   More recently, the New Testament Jesus repeats the same pagan and ancient teaching.

“Let the children alone, and do not hinder them from coming to Me; for the kingdom of heaven belongs to such as these.” (Matthew, 19:14)

But the actual meaning of this statement, from an initiatic point of view, is:

“Only the newly-born, or twice-born, can get to the universal truth.”

“Truly I tell you, unless you change and become like little children, you will never enter the kingdom of heaven.” (Matthew, 18:3) Or, in other words:

“Truly I tell you, anyone who will not receive the kingdom of God like a little child will never enter it.”  (Mark 10:15)

Along the theosophical path, wisdom is obtained by learning to consciously die and be born again in emotion and thought, while keeping the physical body alive and well.

A long journey starts with the first step; an atom contains a magnetic miniature of our solar system. Small initiations prepare the bigger ones, and every day a combination of right action and renunciation helps pave the way to eternal bliss.