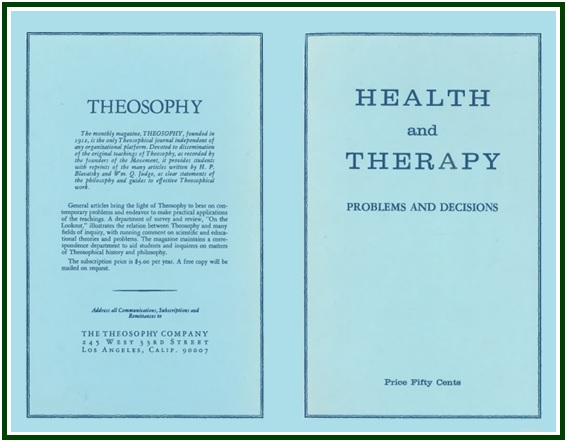 Front cover and back cover of “Health and Therapy”

The pamphlet “Health and Therapy” was first published in the 1960s by The Theosophy Company, Los Angeles, California. Its publication in 2015 is part of an effort led by The Aquarian Theosophist and its associated websites to make relevant texts available to their readers in various continents.

The problems, issues, and decisions raised and evaluated in this 48 pp. volume are relevant in the 21st century.  The opening paragraph strikes a keynote that resonates throughout the pamphlet. It says this pamphlet will appeal to and inform those who:

“...Suspect that physical imbalance or disease is not simply a scientific problem for the professional physician, but also a practical problem for the individual to solve for himself. On the one hand, the sense of well-being which we call ‘health’ cannot be guaranteed to a patient by any man of medicine, while, on the other, numerous persons who suffer from protracted illness or disease have converted their experience into a greater degree of self-knowledge - and therefore a greater feeling of ‘well-being’- than they previously possessed. Specifically, and from a metaphysical standpoint, it is as though a person may need to learn from illness; as if nature requires, at this stage of evolution, that each one discover for himself some of the ‘laws of healing’ through various buffeting of psychological difficulty and physical pain.”

The opening article on pp. 1-8 reminds the reader that health, disease, and therapy can be approached as a Theosophical study. These issues are examined in the light of the fundamental principles of the philosophy of Theosophy, as well as the more specific teachings on the sevenfold nature of the human being.

The text starting on p. 9 addresses the results, risks, and harmful consequences of the practice of immunization documented in the medical and scientific literature. An explanation for the negative side-effects of immunization is offered from the teachings of Theosophy. The author maintains that it is the right of individuals to consent to this treatment. However, it is also their responsibility to inform themselves of the risks and dangers.

“Current Status of Non-Physical Healing”, which starts on p. 17, shows that there is a wide range of knowledge, and motive, among practitioners of “mental healing”, “spiritual healing”, and hypnosis. There are dangers involved which are described in the Theosophical literature and have been observed by clinical psychologists and psychiatrists.

The article starting on p. 20 describes the “Transition” which has occurred in scientific, medical, and societal understanding of the role of mind in the causation and prevention of disease. It concludes on p. 36:

“Every difficulty and tribulation, including those of disease and mental disturbance, may provide the opportunity for self-initiation. Arousal of the ‘will-to-meaning’, in Theosophic terms, marks the beginning of a transition from psychic mind to noetic mind. As a man accomplishes this transition through a series of progressive awakenings, he discards the neurotic fears which diminish resistance to disease and other forms of ill-health.”

The final part of the pamphlet reproduces three articles as source material for the views expressed. These are “Some Statements by H.P. Blavatsky”, “Replanting Diseases for Future Use” by W.Q. Judge, and “Mental Healing and Hypnosis” by Robert Crosbie.

The importance and value of “Health and Therapy” goes beyond the needs of those who are clinicians, psychologists, physicians and psychiatrists. It is worthy of the study and consideration of all who desire to fit themselves to be the better able to help and teach others.

Click Here to Read
“Health and Therapy”, in PDF