The Process of Occult Osmosis

A Silent Interaction Unites Higher And
Lower Levels of Consciousness, and of Karma

It has been well established in classic theosophical literature that the Law of Karma operates in different lines, according to the circumstances of each plane of reality. Karma can be said to be lineal, but its lines are numberless, and they often cross each other.

If we leave the highest planes aside, there are at least three great agglomerations or clusters of karmic scenarios in life:

1) the physical plane,
2) the “astral” plane of  mortal souls, and
3) the buddhi-manasic plane of real life, rather independent from form.

In the totality of the universe, there is perhaps an unlimited number of “slices” or dimensions of reality. Each one has its own karmic scenarios and chains of causation.[1]

Yet interaction is the law of the universe, and karmic self-determination is counterbalanced by interdependence.

The universe is alive. A subtle dynamic unity links all levels, ecosystems and aspects of Nature. No chain of cause-and-effect can isolate itself in its own dominant plane or niche of reality. Every perceived absence of interaction is no more than a temporary illusion. On the other hand, there is an infinite variety in possible forms of interaction, in quality and in quantity, in space, time and rhythm.

At any given level of reality, different chains of causation exert a mutual influence among themselves in their own common ground of life and perception.  They are also subject to the constant influence coming from both higher and lower realms of nature.  They actively influence these higher and lower levels as well.

How does, then, such a vertical interaction operate between celestial and earthly levels of consciousness?  It can work by osmosis, or gradually, as in a silent raining.  It can also operate by irruption, or in a quick, intense way, as in thunder and lightning.

Osmosis, says the dictionary, is the tendency of a fluid to pass through a semipermeable membrane into a solution where its concentration is lower, thus equalizing the conditions on either side of the membrane - a porous partition.[2]

On the other hand, an Irruption between two or more planes of life-consciousness occurs when the accumulated karma in one instance gets fully ripe after a period when the slow osmosis was, for some reason, relatively blocked.

At the right moment, the accumulated energy of that karma, blocked in its osmotic activity, suddenly bursts into other levels of life, invading them and quickly transforming their karmic conditions.

Irruption is then a parenthesis in the process of self-determination.

An irruption suddenly connects or “equalizes” some specific form of karma with other lines of karmic action.

It is widely by osmosis, though, that higher levels of consciousness influence the lower ones, and that “the voice of the silence” can be heard by students of theosophy in their lower selves.  In “The Mahatma Letters”, for instance, a Master of Wisdom uses the verb “to osmose” to describe one of the ways by which a lay disciple can be inspired.  The teacher says:

“But whether we meet or not (….), be assured that my personal good wishes will attend you. Should you actually need now and again the help of a happy thought as your work progresses, it may, very likely be, osmosed into your head …”. [3]

Osmosis is an impersonal, everyday process.  One’s own spiritual monad, Atma-Buddhi, exerts a degree of influence over one’s mind, emotions and actions.  As we have seen, interaction between “celestial” and “earthly” consciousness includes both gradual and non-gradual events. It embraces the soul equivalents to the calm rain, the mist, the dew - and the sudden flash, the thunder, the lightening.

Yet it is the quiet osmosis that grants the constant average transmission of spiritual light from above.  Students who try to live up to theosophical teachings take those practical measures in daily life which they themselves recognize as effective steps leading to a better flow of the “celestial” osmosis.

The same steps make each irruption or insight be a more significant “thunder” and “lightning” than in previous occasions.[4]

The active will of each student makes the difference. The right kind of purpose literally opens the way, by enhancing antahkarana, the symbolical bridge between one’s higher and lower self.

Osmosis is therefore not a mechanical or one-dimensional influence. One should calmly examine what happens to that which comes into the lower self, after passing through the occult membrane that both links it to, and separates it from, its spiritual soul or counterpart.

Contact with higher realms reveals one’s unlearned lessons, and makes it necessary to understand them, or else different degrees of relative failure will be experienced.

Since nothing in the universe is isolated, the learner will have to deal with the collective ignorance of present-day humanity. Ignorance is often well-organized, and has its own forms of osmosis. Wisdom and its opposite cannot be “separated” in our humanity. There is no great distance, therefore, between self-liberation in oneself, and self-liberation in others. It is in solidarity and self-sacrifice that one can make real progress.

The alchemical fire of probation - stimulated by contact with the renewed air of right understanding - provides the right temperature for burning impurities. The dross is then gradually expelled from the metal of which the student’s character is made. Thus “gold” is obtained.  Two of the technical names for this chemical process are “self-knowledge” and “self-purification”.

In every case, the occult osmosis from higher realms is linked to the daily strengthening of one’s will to act in a correct way.  How can we actually observe such an influence?  In the language of Chemistry, “osmometry” is the measurement of osmotic pressure, or osmotic power. In theosophy, it can be said that there is also an osmometry of spiritual soul, by which one observes and measures the pressure and influence exerted by the higher principles of consciousness over the lower ones.

Clarity of vision and common sense enable the student to have the necessary discernment.  The right kind of self-discipline will increase and improve one’s osmotic contact with universal truths. Wise men often say that if there is a diligent effort combined with an absence of hurry, in due time such a contact will become as quick as lightning and thunder.

[1] For a closer examination of this point as it relates to human individual evolution, see the article “Different Lines of Life”, by Carlos Cardoso Aveline. It can be found in our associated websites.

[4] As to the use of ecological metaphors to describe states of consciousness, esoteric philosophy teaches that mind and nature are united in more than one way. H.P. Blavatsky was not alone in proposing this axiom. Influenced in part by Jean-Jacques Rousseau, French philosopher Maine de Biran (1766-1824) made a long-standing practice of self-observation in parallel with the observation of nature and natural processes. Rousseau had written: “I will apply the barometer to my soul…”. Maine de Biran described in his Journal his experiences in reading his own states of mind in terms of ecological processes, and comparing the changing “atmosphere” in his soul to conditions in the surrounding nature.  See “Journal”, Maine de Biran, Édition integrale publiée par Henri Gouhier, Novembre 1954, 253 pp., Éditions de la Baconniére, Neuchatel, Suisse, pp. XIX-XXI and others.  (The book is available at our associated websites.) The same practice of comparing inner and outer worlds is examined in other books on the life and philosophy of Maine de Biran. 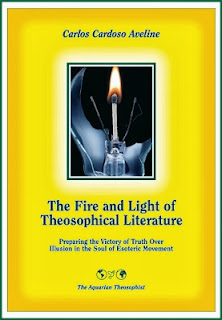