Meditation on the Awakening of Mankind

How the Energy of Human Mind
Creates a Civilization of Brotherhood 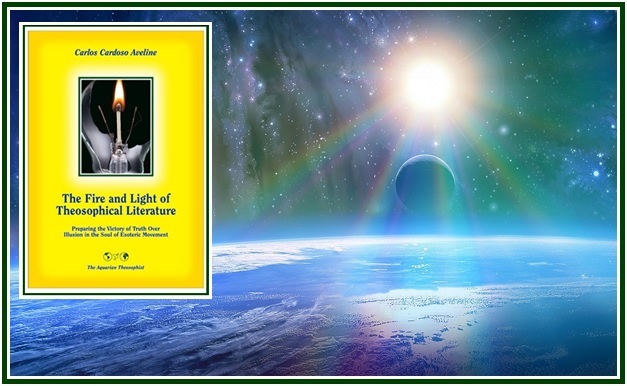 “All that we are is the result of what we
have thought: all that we are is founded on our
thoughts and formed of our thoughts. If a man
speaks or acts with a pure thought, happiness
pursues him like his own shadow that never leaves him.”

The following visualization is an instrument to develop higher potentialities of human mind. It destroys old vicious circles of negative emotions, and makes room for a cultural regeneration.

Being a practical exercise, it helps citizens to become conscious of the fact that their thoughts co-create the future, individual and collective. As a meditation, it is based on a natural law which H.P.B. examined at length in her 1877 masterpiece “Isis Unveiled”.

“Given a certain intensity of will, and the shapes created by the mind become subjective. Hallucinations, they are called, although to their creator they are real as any visible object is to anyone else. Given a more intense and intelligent concentration of this will, and the form becomes concrete, visible, objective; the man has learned the secret of secrets; he is a MAGICIAN.” [1]

In the same book the Russian theosophist added:

“When psychology and physiology become worthy of the name of sciences, Europeans will be convinced of the weird and formidable potency existing in the human will and imagination, whether exercised consciously or otherwise. And yet, how easy to realize such power in spirit, if we only think of that grand truism in nature that every most insignificant atom in it is moved by spirit, which is one in its essence, for the least particle of it represents the whole; and that matter is but the concrete copy of the abstract idea, after all.” [2]

In “The Secret Doctrine”, while quoting some paragraphs from Mr. Subba Row, HPB wrote about the - “mysterious power of thought which enables it to produce external, perceptible, phenomenal results by its own inherent energy. The ancients held that any idea will manifest itself externally if one’s attention is deeply concentrated upon it. Similarly an intense volition will be followed by the desired result.” [3]

The theosophical effort has a long term purpose. Its aim is to “evoke” and make active in our mankind the higher potentialities of human nature so that new and better civilizations can emerge. For this reason, one finds in the Mahatma Letters the following lines from a Master of the Wisdom:

“…We are content to live as we do - unknown and undisturbed by a civilization which rests so exclusively upon intellect. Nor do we feel in any way concerned about the revival of our ancient arts and high civilization, for these are as sure to come back in their time, and in a higher form as the Plesiosaurus and the Megatherium in theirs. We have the weakness to believe in ever recurrent cycles and hope to quicken the resurrection of what is past and gone. We could not impede it even if we would. The ‘new civilization’ will be but the child of the old one, and we have but to leave the eternal law to take its own course to have our dead ones come out of their graves; yet, we are certainly anxious to hasten the welcome event.” [4]

Masters and disciples are therefore anxious to hasten the welcome event of a new civilization, which will be but the child of the old one, and which will correspond to a revival of ancient arts and high civilization. Accordingly, in the closing sentence of her book “The Key to Theosophy”, Helena P. Blavatsky foresaw that if the theosophical movement correctly discharges its duty - “earth will be a heaven in the twenty-first century”.

There is still time. The right relationship between “heaven” and “earth” or celestial and human consciousness must be a central item in the agenda of the theosophical movement in the 21st century and beyond. The next step in human evolution is the efficient use of one’s mind energy so as to attain noble and correct goals and to benefit all beings. And this is no vague dream. It constitutes a historical need to be fulfilled in due time according to the Law of Karma. Each citizen can choose to be an active center of such a silent revolution. A Mahatma of the Himalayas explained:

“The human brain is an exhaustless generator of the most refined quality of cosmic force, out of the low, brute energy of nature; and the complete adept has made himself a centre from which irradiate potentialities that beget correlations upon correlations through Aeons to come. This is the key to the mystery of his being able to project into and materialise in the visible world the forms that his imagination has constructed out of inert cosmic matter in the invisible world. The adept does not create anything new, but only utilises and manipulates materials which nature has in store around him; a material which throughout eternities has passed through all the forms; he has but to choose the one he wants and recall it into objective existence.” [5]

A few paragraphs later, the Master expanded the idea:

“….Every thought of man upon being evolved passes into the inner world and becomes an active entity by associating itself - coalescing, we might term it - with an elemental; that is to say with one of the semi-intelligent forces of the kingdoms. It survives as an active intelligence, a creature of the mind’s begetting, for a longer or shorter period proportionate with the original intensity of the cerebral action which generated it. Thus, a good thought is perpetuated as an active beneficent power; an evil one as a maleficent demon. And so man is continually peopling his current in space with a world of his own, crowded with the offsprings of his fancies, desires, impulses, and passions, a current which reacts upon any sensitive or and nervous organisation which comes in contact with it in proportion to its dynamic intensity. The Buddhist calls this his ‘Skandha’, the Hindu gives it the name of ‘Karma’; the Adept evolves these shapes consciously, other men throw them off unconsciously.” [6]

Three Objects in the Building of the Future

The intention of developing the best potentialities of present humanity is a decisive element in the duty of the esoteric movement. It also permeates and enlightens its three main goals.

The first object of the theosophical effort is to create a nucleus of universal brotherhood. This building process must be attained by giving individual and collective examples of correct action to be followed. The second goal is the study of universal wisdom as taught in the philosophical and religious literature of all time and all nations. With a priority to Eastern traditions, this item helps remove attachment to tribal, national or sectarian horizons.

The third goal is the investigation of the higher powers latent in the consciousness of every human being. It opens an inner door for present-day citizens to become pioneers of future mankind.

These three objects are inseparable. Each one of them makes the other two possible. The second and third goals, for instance, are instruments to attain the first one. And it is the first object which gives the right motive and correct perspective from which to try and attain the other two.

Selfishness is an expression of human ignorance and a blind alley leading to the prison of unhappiness. The meditation on human awakening is an altruistic practice. It might emerge as an answer to the challenging statement made in the Mahatma Letters that mankind is the great orphan, because so far relatively few individuals have developed a sense of personal responsibility for its future. [7]

The following visualization places the rising powers of human consciousness at the service of Universal Brotherhood, as duly required by the law of karma and evolution. Altruism is the only correct way to develop the transcendent potentialities of mind. It is also the most effective way to achieve happiness.

This meditation can be practiced individually or collectively. It is a good idea to make it happen in community associations. It is of course better to meditate in a place where there is silence and clean air. While its regular practice produces better effects than doing it just once, it is beneficial even as an isolated event.

The Awakening of Mankind

1) Sit in an upright posture.

2) Adopt a calmer and deeper breathing. Leave aside thoughts about short term matters.

3) Relax feet, then legs, hands, arms. Relax the muscles of your face. Feel the contrast between the freed muscles and the firm vertebral column. This is an image of how we must face life: being firm in that which is essential, and flexible in matters of secondary importance.

4) Remember this is not your first incarnation, and slowly think of the suffering of mankind in the last few millennia. Calculate the present levels of pain in the different continents of our planet. Look at your own suffering: even hopes and aspirations are often forms of pain. Reflect upon the fact that it is possible to change afflictions into wisdom. Remember that no attachment to suffering is necessary. Calmly consider the task now waiting for human beings: to learn in one’s own soul the art of living with impersonal altruism. This task slowly produces an enduring happiness to all.

5) Visualize humans in every part of the world consciously learning lessons from the obstacles they face. See wisdom and solidarity permeating relations among all in each continent. Imagine humanity awakening now to the unlimited power of mutual help. Keep before your mind’s eye, for an instant, the image of each city and rural community rising to the brotherly solution of its problems. See every place working as part of a global civilization based on the principles of self-responsibility and mutual help.

6) See the radio, television, paper media and Internet websites actively promoting peaceful community goals, local and global. Take a calm look at the present civilization, as it builds solidarity mechanisms in the vast, inspiring world of your own creative mind. Strengthen your personal commitment with this vision. Humanity is the Pascal’s circle, whose center is in the heart of every citizen; and you are no exception.

7) Visualize for a few moments sincere public leaders sharing the process of global awakening. Remember this old axiom, that “there must be more merit in attaining a goal which is difficult, as long as it is noble”. Imagine your city and country as lands of universal peace. See them as ready from now to a new era of fraternity. Keep this image with yourself. Preserve it in your mind and heart.

Every new phase in mankind’s evolution needs its own pioneers. If you can realize you are co-responsible for the collective awakening, consider taking the necessary steps for these visions and glimpses of the future to remain strong and to gradually expand their influence. The best possible way to develop your will-power is by helping accelerate the on-going, already advanced, largely unconscious dawning of the next civilization of universal brotherhood. [8]

[6] “Combined Chronology of The Mahatma Letters and The Letters of H.P.B. to A.P. Sinnett”, Margareth Conger, TUP, see p. 33.

[7] See “The Mahatma Letters”, TUP, Pasadena, Letter VIII, pp. 32-33. In some 20 lines dedicated to this subject, one can read these words from the Master: “For it is ‘Humanity’ which is the great Orphan, the only disinherited one upon this earth, my friend. And it is the duty of every man who is capable of an unselfish impulse, to do something, however little, for its welfare.”