The Harmonics of Smell

The Music of Nature
Includes More Than Just Sounds 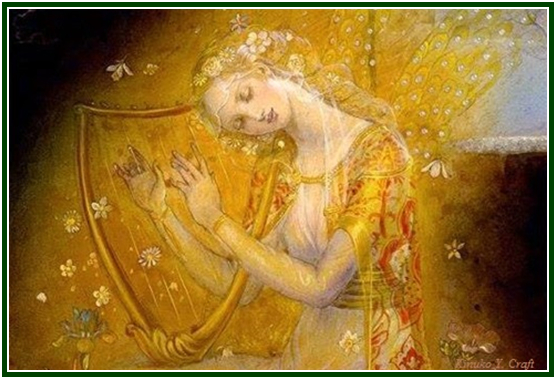 “The fact is - as has been so often
observed - the dream of one generation
becomes the experience of the next.”

The following article was first published at “The Theosophist”, India, August 1882, pp. 283-284. C. Jinarajadasa includes it as Appendix C in his own compilation of Mahatma Letters. [1]

According to Theosophy, the grand music or harmonious vibration permeating the whole of Nature includes not only sounds, but colors, odours - and levels of consciousness.

This same fundamental law of universal vibration operates in our planet, in our solar system, and beyond. Regarding the harmonious correlation existing among different aromas as among all vibrations in life, one of the Masters of the Wisdom wrote in 1882:

“I have just noticed an article on smell by some English Professor (which I will cause to be reviewed in the Theosophist and say a few words), and find in it something that applies to our case. As, in music, two different sounds may be in accord and separately distinguishable, and this harmony or discord depends upon the synchronous vibrations and complementary periods; so there is rapport between medium and ‘control’ when their astral molecules move in accord. And the question whether the communication shall reflect more of the one personal idiosyncrasy, or the other, is determined by the relative intensity of the two sets of vibrations in the compound wave of Akasha.” [2]

Two classical examples of knowledge of the higher levels of vibration present in the world of aromas are the traditional use of incense for the purpose of prayer and meditation, and the ancient (and modern) science of aromatherapy. Readers are invited to see the article “The Music of Colors”, by Alice L. Cleather, which can be found in our associated websites.

In order to make the reading easier, we present the text in smaller paragraphs than at its original publication.

The Harmonics of Smell

The old proverb, that “Truth is stranger than fiction,” is again exemplified. An English scientist - Professor William Ramsay, of University College, Bristol - has just communicated to “Nature” (see number for June 22) a theory to account for the sense of smell which is likely to attract much attention.

As the result of observation and experiment, he propounds the idea that smell is due to vibrations similar to, but of a lower period than those which give rise to the sense of light and heat.

The sensation of smell, he explains, is provoked by the contact of substances with the terminal organs of the olfactory nerves, which are spread as a network over a mucous membrane lining the upper part of the nasal cavity. The proximate cause of smell is the minute hairlets of the nasal membrane which connect with the nerves through spindle-shaped cells. The sensation is not excited by contact with a liquid or solid, but always with a gas. Even in the case of smelling metals, such as brass, copper, tin, etc., there is a subtle gas or pungent vapour given off by them at ordinary atmospheric temperatures. The varying intensities of smells depend upon their relative molecular weight, the smell growing stronger as the gases rise in molecular weight. As to the quality of smell, that he thinks may depend upon the harmonics of the vibration.

“Thus, the quality of tone in a violin differs from that of a flute by the different harmonics or overtones, peculiar to each instrument. I would ascribe to harmonics the quality of smell possessed by different substances. . . . Smell, then, may resemble sound in having its quality influenced by harmonics. And just as a piccolo has the same quality as a flute, although some of its harmonics are so high as to be beyond the range of the ear, so smells owe their quality to harmonics, which, if occurring alone, would be beyond the sense.”

Two sounds, heard simultaneously, he remarks, give a discord or a concord, yet the ear may distinguish them separately. Two colours, on the other hand, produce a single impression on the eye, and it is doubtful whether we can analyze them. “But smell resembles sound and not light in this particular. For in a mixture of smells, it is possible, by practice, to distinguish each ingredient,” and - in a laboratory experiment - “to match the sensation by a mixture of different ingredients.” Apparently astonished at his own audacity, he brings forward “the theory adduced with great diffidence.” Poor discoverer, the elephantine foot of the Royal Society may crush his toes! The problem, he says, is to be solved “by a careful measurement of the ‘lines’ in the spectrum of heat rays, and the calculation of the fundamentals, which this theory supposes to be the cause of smell.”

It may be a comfort to Professor Ramsay to know that he is not the first to travel the path he suddenly has found winding from his laboratory door up the hill of fame. Twenty or more years ago, a novel, entitled “Kaloolah”, was published in America by one Dr. Mayo, a well-known writer.[3] It pretended, among other things, to describe a strange city, situate in the heart of Africa, where, in many respects, the people were more civilized and perfected than contemporary Europeans. As regards smell, for instance.

The Prince of that country, for the entertainment of his visitors - the hero of the story and his party - seats himself at a large instrument like an organ, with tubes, stops, pedals and keys - and plays an intricate composition - of which the harmonics are in odours, instead of in sounds as with a musical instrument. And he explains that his people have brought their olfactory sense, by practice, to such an exquisite point of sensitiveness as to afford them, by combinations and contrasts of smells, as high enjoyment as the European derives from a “concourse of sweet sounds.”

It is but too plain, therefore, that Dr. Mayo had, if not a scientific, yet at least an intuitive cognition of this vibratory theory of odours, and that his smell harmonicon was not so much the baseless image of a romancer’s fancy as the novel-readers took it for when they laughed so heartily at the conceit.

The fact is - as has been so often observed - the dream of one generation becomes the experience of the next. If our poor voice might without profanation invade so sacred a place as the laboratory of University College, Bristol, we would ask Mr. Ramsay to take a glance - just one furtive peep, with closed doors, and when he finds himself alone - at (it requires courage to say the word!) at . . . at . . . at Occult Science. (We scarcely dared speak the dreadful word, but it is out at last, and the Professor must hear it.) He will then find that his vibratory theory is older than even Dr. Mayo, since it was known to the Aryans and is included in their philosophy of the harmonics of nature. [4] They taught that there is a perfect correspondence, or mutual compensation between all the vibrations of Nature, and a most intimate relation between the set of vibrations which give us the impression of sound, and that other set of vibrations which give us the impression of colour. This subject is treated at some length in “Isis Unveiled”.[5]

The Oriental adept applies this very knowledge practically when he transforms any disagreeable odour into any delicious perfume he may think of. And thus modern science, after so long enjoying its joke over the puerile credulity of the Asiatics in believing such fairy stories about the powers of their Sadhus, is now ending by being forced to demonstrate the scientific possibility of those very powers by actual laboratory experimentation. “He laughs best who laughs last”; - an adage that the graduates of India would do well to remember.